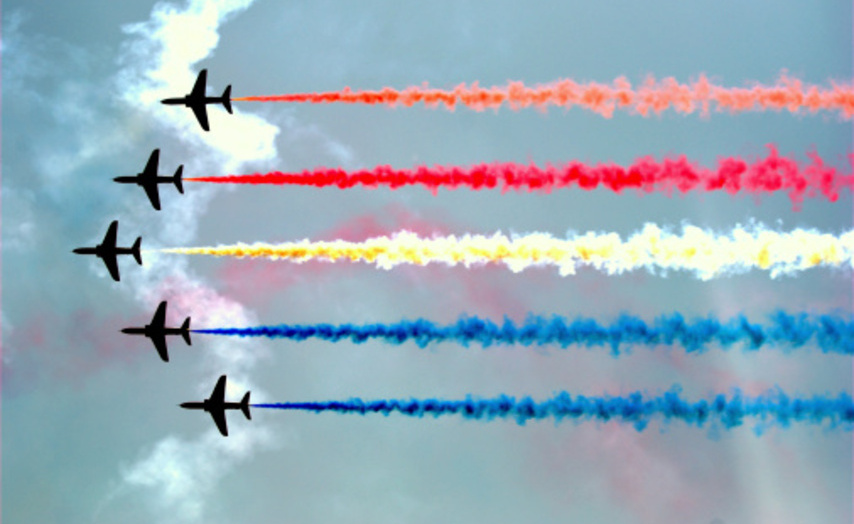 The Red Devils hit the news with a bang this weekend. On a routine airshow display in Cumbria, an extraordinary – and potentially catastrophic – incident happened.

While performing a ‘stack’ manoeuver at 18,000 feet, the parachute of a Red Devil skydiver failed to open properly, resulting in the skydiver above colliding with his half open parachute. A freak event, the requirement to respond quickly and decisively in a high pressure moment was a matter of life and death.

Thankfully, all ended well thanks to their previous training and planning.

Keeping a calm and rational head, they quickly decided their best course of action. They then set about executing their plan of guiding the parachutes down into Whitehaven harbour. Corporal Wayne Shorthouse wrapped his legs around the deflated parachute of Corporal Mike French and used his working parachute to guide them into the water. Meanwhile Cpl French acted as the eyes of the operation, shouting instructions to Cpl Shorthouse whose line of sight was obscured by the deflated parachute.

Calmness, clear thinking and superb communication, combined with a high degree of trust in each other ensured the best outcome in extraordinary circumstances.

Commentators called their response ‘quite remarkable’. But to Cpls Shorthouse and French, it was just another day at the office. Embarrassed by the attention, they recounted that “there was a little more pressure than usual, it was a little heavier, but it was nothing unbearable. We did what we had to do to get out of the situation. We were just doing our job really.”

But their ability to “just do their job” and respond as they did stemmed from superb training and preparation that included detailed scenario planning, absolute role clarity, crystal clear communication and a high degree of trust developed over time. Although they hadn’t been in that situation before in reality, they may have talked through the ‘what if’ for that situation, and even if they hadn’t, their ability to develop and execute alternative plans stemmed from their experience of planning for every eventuality.

So what’s the learning for us to take to how we prepare for important moments?

Firstly, planning, and scenario planning. Know what you’re going into, what might happen, what you might do and what outcome you’d like. Secondly, have absolute clarity about your role and the role of others. Thirdly, when the sh*t hits the fan, trust in each other and allow your training and preparation to kick into action. Keep calm, develop a plan and execute the plan. Your plan might not be ‘the best’ in retrospect, but make the best one you can in the time and with the information you’ve got and then go with it.

Don’t ever use the excuse of ‘we couldn’t ever prepare for that happening’.

Training and preparation prepares you to respond whatever happens, even if you can’t create that exact scenario in practice. Cpls Shorthouse and French showed us that.

So we’ll leave you with some final words from them…“It could have been a lot worse but the training that we do as members of the parachute regiment and British Army means we know what to do. We had a giggle about it and then went for pies, peas and a pint.”

"trust in each other and allow your training and preparation to kick into action."

Next
Mentally Prepare with Sophie Radcliffe